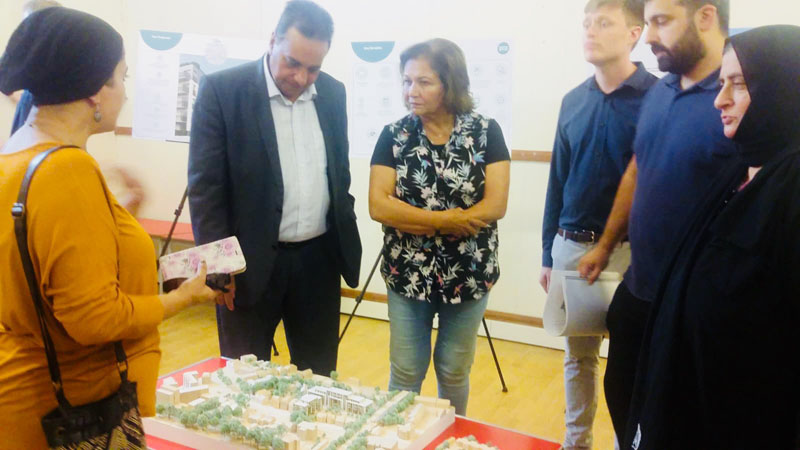 On Thursday 10th January 2019, 10:30pm at the Civic centre,Lampton road, Hounslow the Planning committee came to a decision about Home Groups submitted regeneration plans for Concorde Close, Hounslow, TW3 4DG. Although the planning officers had deemed the application as recommended for approval the majority of the Councillors had their own opinions that undoubtedly dismissed planning regulations and even aspects that the Mayor of London Sadiq Khan would perceive as a positive development in a time of a housing crisis.

“To tackle the capital’s housing crisis, we need to think beyond large developers – councils, small builders, and community groups must play a vital role too. Community-led housing puts residents at the heart of the process, giving them a voice and the chance to contribute to designing their community.

The Mayor of London, Sadiq Khan

Unfortunately the planning committee did not take into consideration the impact their decision would have on the tenants of Concorde close as they favoured the objections of the surrounding neighbours many of whom are profitable business owners who are well connected with Hounslow ward Councillors.  In the meeting the councillors refusal was based on the following reasons such as scale, bulk and intrusiveness . These were objections that the planning officers themselves stated that all fall within the planning guidelines which would therefore lead many to question whether these comments were actually credible grounds for refusal? many of the Councillors appeared uncertain themselves as they hesitated when asked by the chair to voice their grounds for refusal, however with the assistance of objecting residents calling out they managed to regurgitate what had been conveyed by these neighbouring residents. The chair did not address those members of the public calling out during the meeting and made no attempt to have these persons removed.

It was made clear in the meeting that opposing neighbours had contacted the Councillors, this was made evident by one of the Councillors during the meeting stating this. The majority of residents from Concorde close feel they had been let down by the system where double standards are accepted. As the CCRA had been in touch with our ward councillors but they have done nothing to support us or actively listen to our views.

On numerous occasions throughout the meeting planning officers were having to highlight and defend their recommendations, and appeared to have their expertise undermined and shunned by a few of the Councillors. Many spectators would agree that the tone from the start was that of committee members that had predetermined decision based on what the neighbours of Concorde close had objected to, who had rallied together for the meeting jeering whilst clutching ‘No to Concorde close signs’. What was astounding was the lack of consideration for the tenants of Concorde close, all the Councillors apart from Councillor Richard Foote had completely overlooked the concerns and needs of the majority of tenants of Concorde close that had their views channelled by the CCRA in a statement.

Following the decision the CCRA contacted all the Councillors on the planning committee asking them to confirm if they had read the CCRA’s statement and  only 3 took the time to respond. Councillor Tony Louki stated the following:

“Unless sent to councillors too, comments submitted on planning  applications are not seen by members of the planning committee.  Parts of submissions do sometimes form part of an officer’s report as was the  case when  summarised at  paragraph 5.4.”

It would lead us to believe that if none of the Councillors were going to see statements left by members of the public via the planning online comment facilities then what is the point of a clearly pointless exercise? the system appears to be flawed, unfair and favours those with money and influence where is the democracy and empathy?

The residents of Concorde close were initially very weary of Home Group’s agenda due to issues raised in various documentaries & anti regeneration campaigns about the negative aspects the regeneration of ‘sink estates’ and the notion of ‘gentrification’ that was associated with it, but after researching further and following the plans with scrutiny the CCRA were satisfied that the well-being of Concorde close tenants were being considered through community engagement sessions. The regeneration would provide large improvements to the living standards of existing social tenants, while providing additional affordable homes. Security would be improved substantially and socially, the regeneration would give new opportunities for youth / community and inter generational work to inspire and empower socially isolated residents, that are vulnerable and require the support that is channelled through community relations initiative projects and workshops that the CCRA & Home group would be partnering up to implement. Presently, vulnerable tenants are struggling to heat their properties due to heat poverty caused by poor insulation which causes heat to escape rapidly. In addition to this the heating systems such as electric storage heaters are very expensive to run and as a result many residents are not able to switch heaters on as they simply cannot afford the costs. The implications of this especially during the winter months is detrimental to the health of many, as damp ravishes through the cold interior of properties. The air circulation throughout the properties is unsurprising very poor and assists in aiding with the aggressive rising damp issues, which isn’t helped by the dated design and overcrowding as many of these properties are over occupied. Unfortunately those with health related concerns such as asthma are really struggling too. The CCRA were very sad to hear that we recently lost one of our elderly residents who suffered with pneumonia which led to sepsis. Living in a cold, damp property did nothing to assist the health & well-being of this resident and those alike who have been suffering for many years will continue to do so.

Due to lack of security the external area of the property is susceptible to various anti social crime habits such as high volumes of drug activity, burglaries, theft,fly tipping, solicitation and vehicle crime. There is research such as the broken window theory that suggests

The estate attracts high levels of crime due to poor design, lack of security and poor maintenance in conjunction with the lack of police presence.

Not once were the needs of the tenants of Concorde close questioned by the Councillors even though the CCRA had been in contact with Councillor Nirsar Malik and  Amjer and Pritam Grewal  especially when the planning committee had previously approved an OCTAVIA development on Lampton road adjacent to Golds gym that towers at 6 – 7 storeys high at it’s highest point and can be seen from Concorde close, undoubtedly causing lighting and privacy issues to neighbours to the north. This development is for private sales only and do not offer housing opportunities for social tenants. In addition to this the planning committee approved the Notting Hill Genesis development situated next to the current Civic centre offering 919 units (459 private sale, 370 Shared Ownership, 90 affordable rent) again no mention of housing for social tenants

Home Group have been in contact with residents to inform us that they now await the official reasons for the planning refusal so that they can continue to pursue a positive outcome to improve the living conditions of their tenants.

This website uses cookies to improve your experience while you navigate through the website. Out of these, the cookies that are categorized as necessary are stored on your browser as they are essential for the working of basic functionalities of the website. We also use third-party cookies that help us analyze and understand how you use this website. These cookies will be stored in your browser only with your consent. You also have the option to opt-out of these cookies. But opting out of some of these cookies may affect your browsing experience.
Necessary Always Enabled

Any cookies that may not be particularly necessary for the website to function and is used specifically to collect user personal data via analytics, ads, other embedded contents are termed as non-necessary cookies. It is mandatory to procure user consent prior to running these cookies on your website.